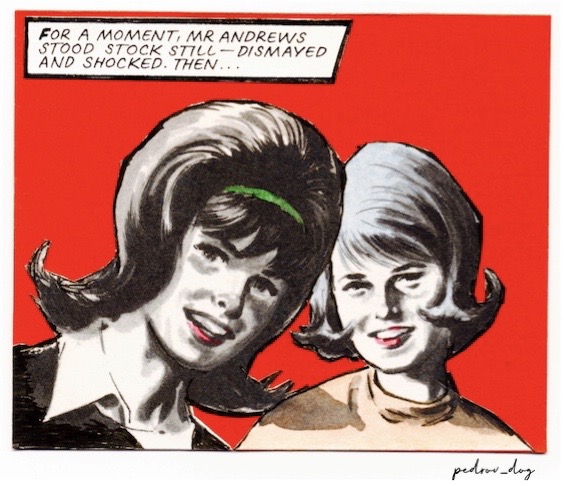 From a series of short form fictions taking inspiration from collage.

For a moment, Mr Andrews stood stock still – dismayed and shocked. Then, with the ice cold water seeping down through his clothes, he lifted the upturned plastic bucket free from his head. The muffled giggling he’d heard start only seconds ago, now became clear in tone.

“Oh Mr Andrews,” came a voice, “We’re so sorry, but we couldn’t resist a classroom prank – not on the day we have returned to visit you specially!” Wiping his eyes with a white handkerchief drawn from his pocket and replacing the spectacles which had become dislodged from the pronounced bridge of his nose, Mr Andrews stared at the two young women in astonishment.

Recognition synchronised with memory. “My God,” he said, dropping the bucket to the floor, “it’s the non-identical Faith twins – Nancy and Trixie!” As he approached the unexpected visitors, Mr Andrews lost his balance, slipping on the floor where a puddle of water now surrounded him – falling forward onto his hands and knees.

“Oops, Mr Andrews! No grip on those shoes!” said Nancy, the more talkative of the two. “Here, let us help you to your feet.” The young women hauled up their former schoolteacher and dragged him over to a chair, located behind a wooden desk at the front of the empty classroom.

“It’s such a surprise to see you both.” He said, pulling at the front of his woollen jumper, checking the level of drench he’d incurred. “It must be four years since I saw you last.”

“You must have gone through university, what are you both doing now – what have you become?” The twins exchanged a glance containing a glint of wickedness even Mr Andrews – despite his lack of worldly-wise experience, could not miss. “Go on girls, tell me, what have you become..?”

This site uses Akismet to reduce spam. Learn how your comment data is processed.